You are here: Home > Securing our Hybrid Cloud 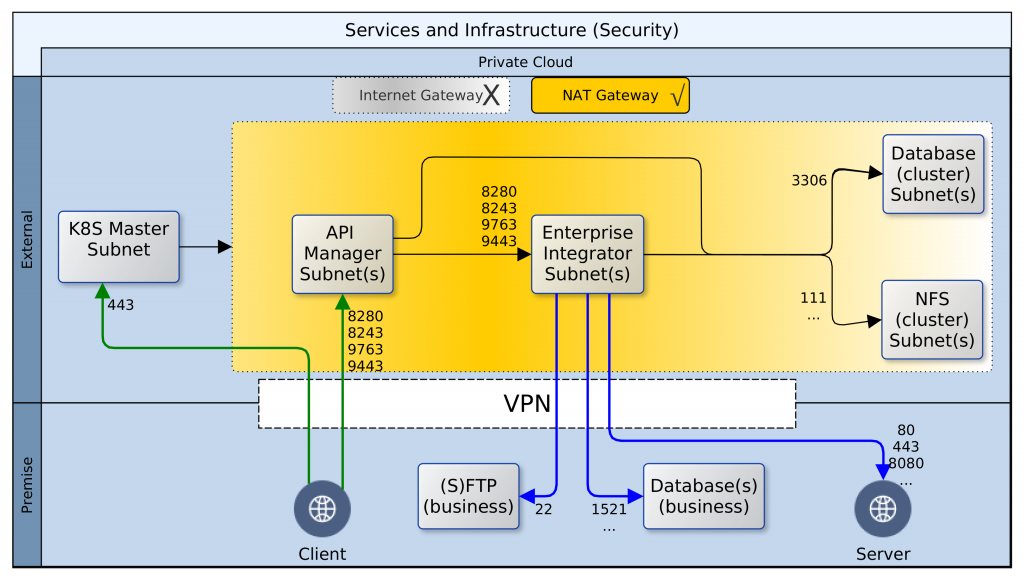 In a previous article, “One thousand servers, start with one click”, I described the design and implementation of a simple hybrid-Cloud infrastructure.  The view was from a high level, and I intend, God willing, to delve into the detail in a later instalment.  Before that though, I wanted to touch on the subject of hybrid Cloud security, briefly.

Having deployed resources in a private Cloud and on-premise, certain precautions should be taken to secure the perimeter and the green zone inside the two networks – Cloud and premise.  The diagram above paints the big picture.  It shows how, based on AWS security recommendations, minimal access/privilege is granted to each resource in the networks.  The focus here is on machine access, which is about the lowest level of security.  I will not delve into AWS policies, VPN configuration or on-premise firewall rules, as these are not black-and-white and the detail involved does not fit in with the goal for this article.

Here goes!  Reading the diagram and translating to words:

And that’s all folks! Once again, this is not an exhaustive coverage on all the aspects of security required for this hybrid-Cloud.  It is rather a quick run-through of the foundational provisions.  The aim being to identify a few key provision that can be deployed very quickly and guarantee a good level of protection on day one.  All of this builds on a principle adopted from AWS best practise. The principle states that AWS is responsible for the security of the Cloud while end-users are responsible for security in the Cloud. The end-user responsibility of Cloud security begins with another principle: access by least privileges. This means that for a given task, the minimum privileges should be granted to the most restricted community to which one or more parties (man or machine) is granted membership.

Posted on January 1, 2018 by ntadmin in Insight, Knowledge, Tech-Tip

View all posts by ntadmin →
← 1000 Cloud Servers: Start With One Click
Cloud Migration and Availability Index →